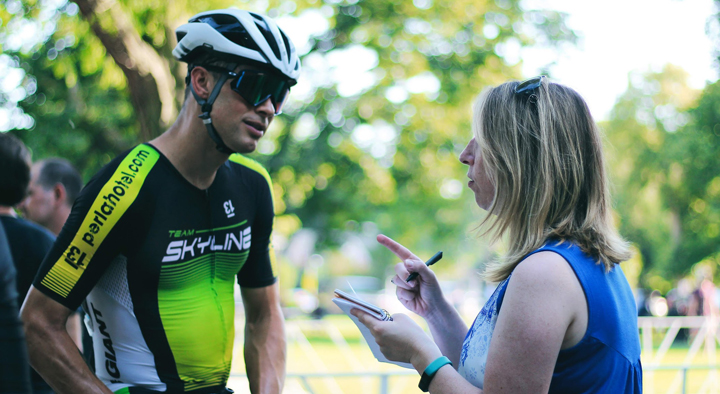 Intelligentsia Cup is an event our professional cycling team Skyline competes in annually. This is a series of races that revolve around Chicago. Today over 1 million people in Illinois have diabetes and many of these people are children.

While the team looks forward to racing the Intelligentsia Cup each year Ryan was specifically looking forward to being able to bring some of the team to a speaking engagement with the Advocate Sherman Hospital. This was one of the larger hospitals local to where the team was staying.

I was asked to come and give a presentation to both doctors and medical professionals as well as to a separate group public as well as anyone who might be interested to hear what we had to say about diabetes.

Ryan was able to speak to both groups of people enlightening everyone to the efforts that were required to be physically competitive at a professional level of sport while managing a disease. The team brought a trainer as well as one of the team bicycles to illustrate the effects live on screen of watching Ryan’s glucose go up and down depending on the amount of insulin needed. This is especially effective for those that don’t realize how much harder the body must work to function with a disease such as diabetes.

We are extremely excited to get back to Advocate Sherman Hospital next year and speak. Hopefully we can grow our attendance and be able to speak to more people. We also plan on making our presentations available over video soon.

Listen to an informal interview Ryan gave with the race organizers specifically about the race itself below.